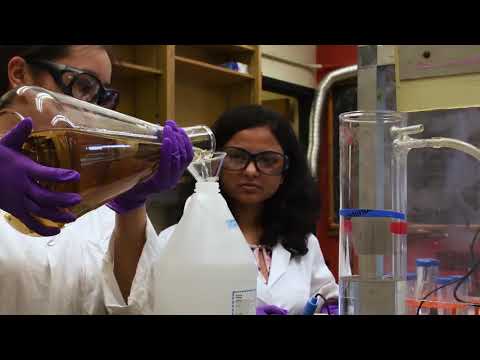 Genecis is an innovative bio-cleantech company that upcycles organic food waste into high-quality biodegradable PHA (polyhydroxyalkanoate) polymers. Both organic waste management companies and traditional petroleum plastic producers are facing increasingly tough regulatory and economic challenges and Genecis’ technology provides an environmentally and economically sound solution. With respect to waste management, our solution is a superior alternative to current organic waste recycling methods such as landfilling or anaerobic digestion. Specifically, Genecis’ technology provides waste managers with a process that is 100x more profitable than landfills and 21x better than anaerobic digestion. In addition, our polymer biodegrades in nature within a year and is produced cost-competitively to all other bioplastics.

Genecis' mission is to “up-cycle the waste of today into the platinum of tomorrow”.

Genecis Bioindustries is offering a $2M SAFE (Simple Agreement for Future Equity) note at a valuation of $8.5M USD ($11.3M CAD). This investment is eligible for accredited investors only.

*Update: As of June 21st, Genecis' SAFE note is oversubcribed, and will remain open up to a maximum oversubscription of an additioanl $300K over the original note. The oversubcription period will run until July 31st or when the additional $300K is subscribed, whichever comes first.

Genecis will use approximately $1.5 million of funds raised to finance the design and construction of a small pilot facility this year, with capacity for processing 150 tons of organic waste per year.

Genecis is an early-stage organic waste processing company that turns food waste into biodegradable plastic pellets. Genecis will obtain organic waste from waste collection companies. Currently, Genecis is partnered with Sodexo, one of the largest food service providers in the world, and the third largest waste hauler in Ontario, both of whom are able to source roughly 600K tonnes of organic waste a year that can be used in our process.

PHA biodegradable plastics produced by Genecis have comparable material properties to traditional petroleum-based plastics and have the added benefit of completely degrading in nature within a year.

In the future, Genecis plans to builds its own extensive database of bacterial DNA sequences. Once DNA is sequenced and analyzed, it will be stored in their database. Currently, Genecis has laid the foundation for this platform by developing over 300 unique species of bacteria, with metabolic pathways that allow for the production of PHAs cost-competitively and more efficiently than incumbent PHA manufacturers.

Genecis is particularly interested in collecting a variety of bacteria that can produce chemicals of higher value. In parallel, Genecis will build software and hardware, namely the SynBio Platform, which will be capable of creating more than 100 cultures of bacteria a day, which can then be used in production facilities or licensed to other chemical manufacturers, if they meet the necessary requirements.

As compared to time-intensive processing cycles of most composting or anaerobic digestion facilities, Genecis can produce PHAs in seven days. Genecis also has a massive pricing advantage over these plants, as the end product of Genecis’ process is shelf-stable, high-value PHA bioplastics as opposed to low-value fertilizer or methane.

As compared to other plastics on the market, Genecis’ PHA plastics major advantage is that it can degrade in nature within a single year and in a composter within 4 to 8 weeks, thus making it truly biodegradable, while maintaining the same material characteristics and functionalities offered by petroleum-based plastics. The closest biodegradable plastic alternative, PLA (polylactic acid), has a degrading period of 80 years. Other existing PHA bioplastic producers have extremely high costs. By attaining organic waste at a negative cost, Genecis avoids more than 40% of current commercial PHA production costs.

Further, Genecis is positioning itself for future success with the creation of their own bacterial database and platform, SynBio, which will eventually enable them to process organic waste into higher value chemicals and polymers. Most players in the Synbio space utilize sugar sources as the feedstock for creating high value chemicals and materials through bacterial fermentation, whereas Genecis is able to use low-value organic waste to produce the same high-value products. 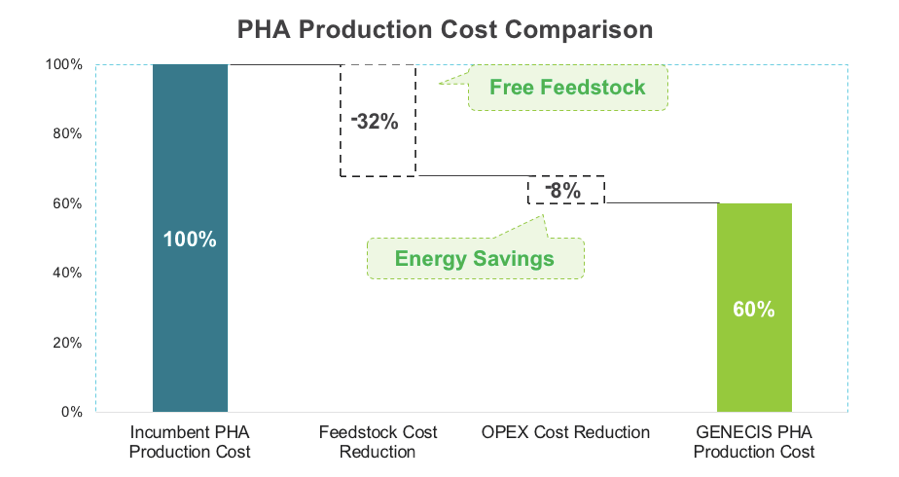 Genecis’ offering is a social, environmental and economical method for not only disposing organic waste, but also up-cycling it into valuable biodegradable plastic products. Genecis will reduce GHG emissions in the following ways:

Additionally, by creating a 100% biodegradable plastic that degrades in nature within a year, Genecis will be contributing to the reduction of plastic pollution as well as attempting to reduce the hazards that non-biodegradable plastics pose on wildlife, marine life and the entire food chain.

All private securities listed through online investment platforms and Exempt Market Dealers (EMDs) like SVX are likely to carry more risk than those available on the public markets. Our goal is to make you aware of those risks before making an investment. For further details on the risks in the private markets, refer to the SVX Risks section. Some of the offering specific risks are identified below:

Liquidity Risk: This investment has substantial liquidity risk. As this is an early stage private equity investment in a pre-revenue, pre-commercial venture, there is no reasonably expected exit event in the near-term future.

Intellectual Property Risk: Genecis relies heavily on its IP for product success and protection. This is particularly crucial given Genecis uses bacteria for its growth multiplier.

Business Risk: As Genecis is a pre-revenue and pre-commercial biotech venture, with most of its performance to date related to R&D, there remains uncertainty in confidently estimating how Genecis will perform once out of pilot phase.

Market Adoption Risk: Genecis will not begin commercial sales of its PHA product until 2020. There is lower market adoption risk in its organic waste collection and PHA production revenue stream, as it has lined up multiple industry partners and LOIs.There remains significant R&D to bring its SynBio platform to market, as the business model, potential sales list, and software/hardware components have yet to be clearly identified.

Luna Yu, the founder and CEO of Genecis, is an experienced founder and manager. She has previously founded and grown three startups. This includes a software company where she managed over 20 IT specialists. The other two companies were formed in partnership with professionals from both Canada and China. She holds an Honours Bachelor of Science and a Master of Environmental Science from the University of Toronto.

Abdul holds a MASc. degree from University of Toronto, and has over five years of experience in business development. He served as an environmental consultant, coordinating with hundreds of clients in the GTA, ensuring projects were done with a high level of quality and within the regulatory frameworks set by the governments. He also worked as an operations manager for a security firm, leading the development of multi-million dollar deals and managing over 70 staff members. Abdul also holds a B.Sc. in biopharmaceutical science with a specialization in genomics.

Hasitha has an M.Sc. in biological chemistry, a B.Sc. in biochemistry, and over seven years of experience working in various biochemisty, nanomaterials, and biotechnology laboratories. Hasitha has successfully conducted research projects and published multiple articles in a variety of high-impact factor journals. Additionally, he has competed and won multiple awards and scholarships during his academic career, including the NSERC award.

Brad has an MBA in finance and holds a CPA issued from Ontario. He has 20 years of financial leadership roles in the plastics industry with The Dow Chemical Company. His experience includes working with NatureWorks LLC through their start-up phase, to launch their initial biopolymer. Brad is currently an Accounting Professor with Humber Institute of Technology and Advanced Learning and a coauthor of a managerial accounting textbook used on university  and college campuses across Canada. He is also an active member of the board of directors of Caledon Community Services in Peel region.

Dont miss a thing. Sign up for our
Newsletter now!